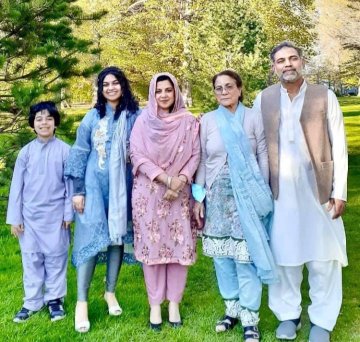 One week ago, a driver of a pickup truck in London, Ontario, ran down five pedestrians, killing four of them.  It was a premeditated attack, and he chose his victims because they were Muslim, the police said on Monday.

“There is evidence that this was a planned, premeditated act and that the family was targeted because of their Muslim faith,” said Detective Superintendent Paul Waight of the London Police at a news conference.

A public funeral was held on Saturday for Salman Afzaal, 46, a physiotherapist who worked in long-term care homes; his wife Madiha Salman, 44, who was a doctoral student in civil engineering; their daughter, Yumna, 15; and Mr. Afzaal’s mother, Talat Afzaal, 74. Fayez, 9, and now orphaned, remains hospitalized with serious injuries, but is expected to recover.

There has been an outpouring of both grief over the attacks, as well as support for the young boy who was orphaned, including two social media campaigns which have raised close to two million dollars in just one week. Some of the money will go to the orphaned boy, and the remainder will be donated to a charity of the family’s choice.

There have been calls for a summit on Islamophobia by Canadian Muslims, and there is now a summit planned by the end of July to discuss the rise in hate crimes against Muslims in Canada.

The government has called the attacks a terrorist attack, and the perpetrator was charged accordingly. This is in addition to four charges of murder and one count of attempted murder.

Canada is known for its openness to immigration and its ethnic diversity, and the Muslim community in London dates back to the turn of the 20th century, and is particularly prominent. Mr. Holder, the mayor, said that Arabic is the second most common language in the city, and about 10 percent of the city’s 405,000 residents form its Muslim community.

Friends of the family have expressed that they want the family to be remembered for more than the tragedy of their deaths, including that they were kind, loving, often smiling, upstanding members of the both their Canadian community and their Muslim community.

The government has called the attacks a terrorist attack, and the perpetrator was charged accordingly. This is in addition to four charges of murder and one count of attempted murder.

We express our heartfelt sadness over our collective loss of a beautiful family, and our sadness that this is the way our world works so often. We also send our hope for a better, more peaceful, more loving world, where children like Fayez will never have to face the world alone as a result of terror and hate. Inna lillahi wa inna ilayhi rajioon. May Allah grant Fayez shifaa and sabr, bless the victims with Jannah Firdaus, with no accounting, increase their reward for their good deeds, and help us remember their names in ways that would make them happy. Ameen.

“The rich inheritance of justice, liberty, prosperity and independence, bequeathed by your fathers, is shared …