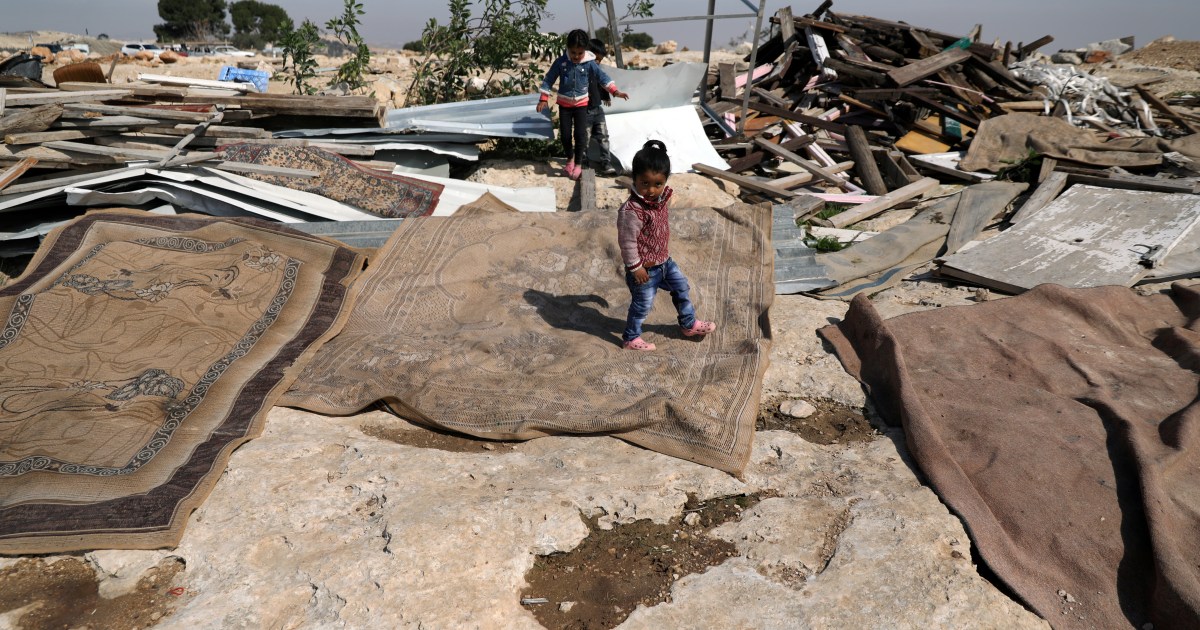 Four out of five children in the occupied West Bank and East Jerusalem whose homes have been demolished by Israeli authorities say they have lost faith that anyone can help or protect them and feel “abandoned by the world”, child rights organisation Save the Children has found.

The report published on Monday comes as Palestinians living in the Sheikh Jarrah and Silwan neighbourhoods of occupied East Jerusalem face expulsion from their homes to make way for Israeli settlers, pending decisions by the Israeli Supreme Court.

The report, titled Hope under the rubble: the impact of Israel’s home demolition policy on Palestinian children and their families, consulted 217 Palestinian families across the occupied West Bank and East Jerusalem, all of whom had their homes demolished by Israeli authorities in the past ten years.

Of the children surveyed, 80 percent said they had lost faith in the ability of the international community, authorities and even their parents to help and protect them. They reported feelings of powerlessness and hopelessness about the future, the report found.

“Nobody stopped them – or could stop them again – from destroying our home, our lives. So why should I bother to dream about a good future?” Fadi*, 16, told Save the Children.

The report also found that 76 percent of parents and caregivers feel powerless and unable to protect their children after losing their homes. A majority also said they feel shame, irritation and anger while 35 percent said they felt emotionally distant from their children.

The majority of children interviewed showed high rates of distress, including feelings of sadness, fear, depression and anxiety. Children described having frequent nightmares, feeling like nowhere is safe for them, and being paralysed with fear, the report found.

“All I have are sad memories. I still feel traumatised by the soldiers and their dogs attacking and injuring my father [during the demolition],” Ghassan*, 15, told Save the Children.

“I have nightmares about the bulldozers ripping away every stone in our house, and the sounds of the explosions still haunt me.”

Faris*, 14, said: “We keep moving around to find somewhere to live – the instability is driving me crazy. I feel that wherever I go, they will come for me and destroy my life.”

Jason Lee, Save the Children’s country director in the occupied Palestinian territories, told Al Jazeera that the psycho-social impact from demolitions on these children is “unfathomable”.

“Three out of five children have had an impact on their education when their homes have been demolished. They found it difficult to resume their schooling, their studies which means that there are very limited opportunities for them for getting a job later on,” Lee said.

The report also found that seven out of 10 children said they felt socially isolated and had no connection to their communities after their homes were demolished.

“That’s a staggering amount of children that have no connection any more to their land, to their communities, they’re essentially drifting on,” Lee said.

“The fact that these demolitions, this coercive environment has been happening for decades, we are essentially impacting an entire generation of children and effectively, in a way, stealing their futures.

“If you have children that are feeling stressed, have feelings of depression, anxiety, sadness, not feeling safe, not engaging in their studies, not engaging with friends, with communities and families, what future are we creating for a whole generation of Palestinian children?” Lee said.

Since 1967, Israeli authorities have demolished 28,000 Palestinian homes, according to Save the Children. About 6,000 children and their families have been affected by demolitions in the past 12 years.

The child rights organisation noted in a press release on Monday that the demolitions are illegal under international law and Israel, as the occupying power, must protect the rights of those living under occupation – especially children.

The child rights organisation has urged the new Israeli government to halt the demolition of homes and property in the occupied Palestinian territories and “revoke policies that contribute to a coercive environment and increase the risk of forcible transfer of Palestinian communities”.

*Names have been changed